How one Mid-Michigan patient has found new opportunities to give back. 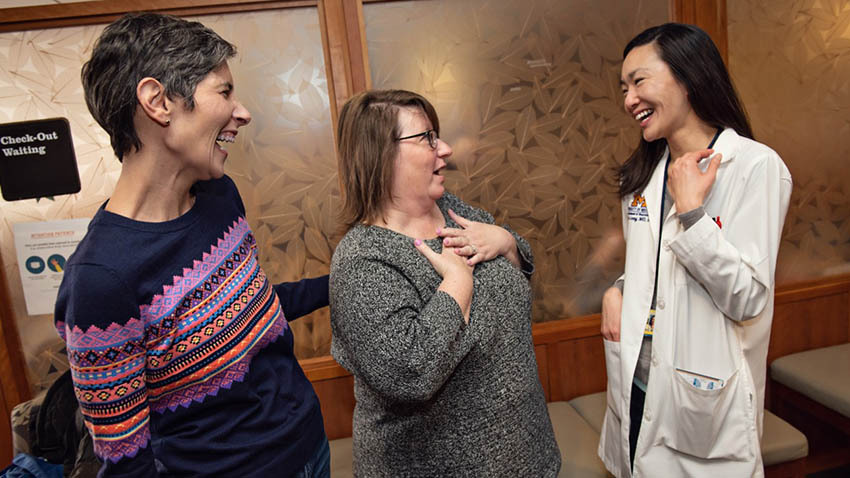 Andrea Passmore learned she had a brain tumor four days before her 51st birthday. Yet she has ultimately come to see the diagnosis as a kind of gift, an opportunity to share the outpouring of support that she has received during her cancer journey.

Friends, family, and those that she barely knew from as far away as Africa stepped forward to help, and she says she has felt more love and appreciation than ever before.

“I’ve come to see it as a sort of blessing,” she says of her tumor -- an oligodendroglioma, a rare, usually slow growing tumor that can develop in the brain or spinal cord.

More than 1,200 people are diagnosed with oligodendroglioma every year, most often between the ages of 35-44, according to the National Cancer Institute. It’s considered a malignant primary brain tumor.

The cause is unknown, but exposure to radiation and certain gene changes that can be passed down through families have been linked to a higher chance of developing it, the NCI notes. So far, no one else in Passmore’s family has it, although one of her siblings experienced a different form of cancer.

Because there is no cure, Passmore, now 53 and living in Gaines, Mich., is being monitored by Denise Leung, M.D., a neuro-oncologist with the University of Michigan Rogel Cancer Center and a clinical assistant professor of neurology at the U-M Medical School. That monitoring will continue for the rest of her life.

“She stands out because she is a really positive person,” Leung says. “She has a great attitude and that goes a long way in terms of quality of life and how she receives her treatment.”

Passmore believes her tumor started growing in the temporal lobe on the left side of her head around January 2011. That’s when Passmore -- whose family includes her husband, two adult children, five stepchildren and eight (soon to be nine) grandchildren -- had a migraine for 14 days straight.

After an MRI in nearby Flint, a physician told her she’d had a stroke. “I was told that the area where it hit was ‘safe’ and it didn’t cause any damage to my physical ability, speech or vision,” Passmore says. A neurologist got the migraines under control, but to this day Passmore believes the she didn’t have a stroke, but actually the damaged area doctors saw on the MRI was her tumor, which was discovered in the same area of her brain six years later. (Headaches are one of the symptoms of oligodendrogliomas, as are seizures, problems with thinking and memory, weakness, numbness and balance issues.)

The next symptom emerged on a shopping trip in mid-March 2017. She grabbed a bottle of peanuts off the shelf and was reading its label when one part of the label multiplied by threes and moved to the left.

“My vision was weird but I could still see OK,” she says. She cashed out, put the items in her car, moved her car away from others and sat there until her vision returned to near normal, then drove herself home. She called her doctor the next day and an MRI was ordered on March 24.

“I thought I needed a vision exam and new glasses. It didn’t register in my brain that something serious was going on,” Passmore says. Three days later, she got a hint of the challenges ahead. 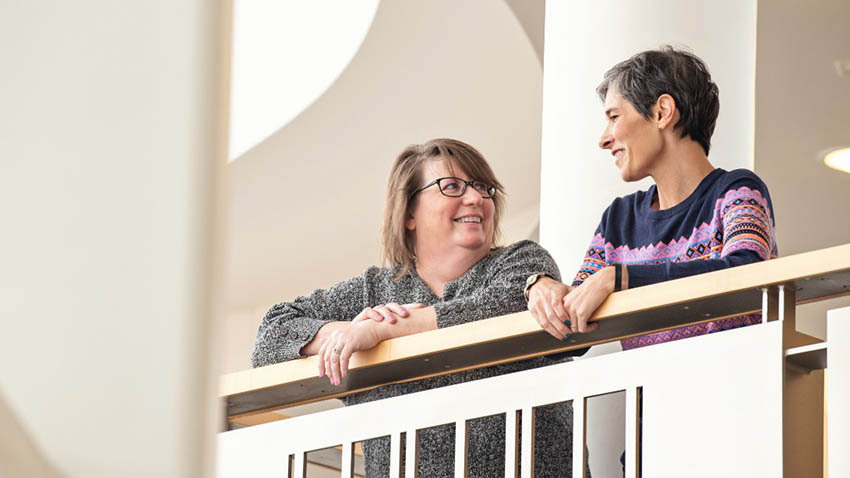 Passmore learned that the first treatment would be surgery to safely remove as much of the tumor as possible, and to obtain tissue to determine precisely what type of tumor she had. That’s how Passmore learned her tumor was indeed malignant.

Passmore chose Michigan Medicine for her care after evaluating three health systems. On June 1, 2017, neurosurgeon Jason Heth, M.D. and his team performed a 13-hour operation to remove the tumor. Passmore was awake the whole time to help avoid damaging important brain areas. During the procedure, the surgical team questioned her and she performed simple tasks, like singing or wiggling the toes, to check those language and motor functions.

Next came radiation from July to September and chemotherapy from October to May 2018. She resumed working at a heating and cooling company nearly six months after surgery. The only issue involved forgetting an occasional word in her writing.

“I would work Monday through Thursday weekly and handled chemo or doctor appointments on Fridays,” Passmore says.

She returned to the operating room in August 2018 after repeatedly experiencing a sensation from ear to ear that caused her to grit her jaw tight. Michigan Medicine neurosurgeon Oren Sagher M.D. diagnosed the condition as seizures, a sign that the tumor could be growing again. She had more of her left temporal lobe removed, and she was cautioned that there was some risk of increased language issues or weakness.

“I will never forget about 6 a.m., waking up and ringing the nurses because I needed to use the restroom and I was really hungry,” she says. “When the nurses came into my room they were crying -- in happiness -- because I was still walking, talking and really wanted something to eat. They took such good care of me.”

Passmore is currently doing well and doctors are monitoring her cancer for any sign of recurrence.

Instead of being caught up in the uncertainty of the future, Passmore says she’s focused on being a gift to others. She stopped working in January 2019 and is an active volunteer, sharing her experience with other cancer patients, visiting homebound ill members of her church, where she’s a deacon, and lending a helping hand whenever she can.

One of the fellow travelers that Passmore had befriended is Katie Dorr, of Clinton, Mich., who is also being treated at U-M for a different type brain tumor.

Dorr, 38, had been studying nursing before receiving her diagnosis in June 2018 -- a rare, high-grade glioma known as anaplastic astrocytoma. She, too, is doing well and continuing with regular chemotherapy treatments. 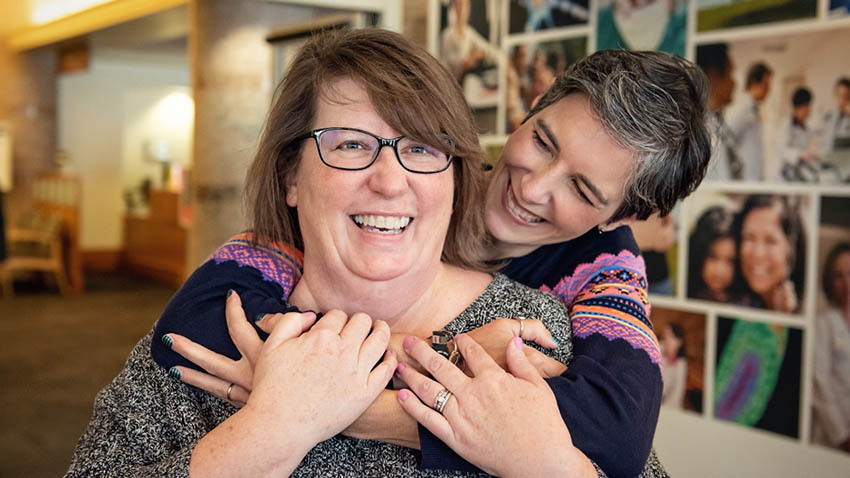 Patients Andrea Passmore, left, and Katie Dorr are supporting each other through the ups and downs of living with brain cancer.
Photo credit: Leisa Thompson

Dorr was introduced to Passmore through Leung, whom she calls “a phenomenal neuro-oncologist.”

“She asked if she could share my name and number with Andrea,” Dorr says. “And that just snowballed into meeting other women through the cancer center. And now we have the wonderful little support group.”

Passmore is someone that Dorr is able to turn to for advice or just for a friendly, empathetic voice.

“When you’re going through an emotion that’s new to you or new to your family, she steps in and just reassures you that it’s normal and that she’s gone through it too,” Dorr says. “When I have feelings of despair or if I’m feeling lost, I know I can reach out to her.”

The two have shared stories of their lives — before diagnosis, after diagnosis, and about their lives now as they continue to adjust to new stages in their cancer journeys.

“Every time I call her, she laughs, she giggles -- she’s just so happy all the time,” Dorr says. “And she does a lot of the checking in. She’s really great at that.”

For Passmore, it’s about sharing and giving back.

“I think going through surgery and radiation and chemo really showed to me how precious life is and how blessed I am,” she says. “I had so many people that helped me out in simple to major ways.”

And she wants to return that favor.

“I know that I am still here on earth for a reason,” Passmore says.

Glioblastoma patient is beating the odds