Creating inspiration for those with cancer in their lives 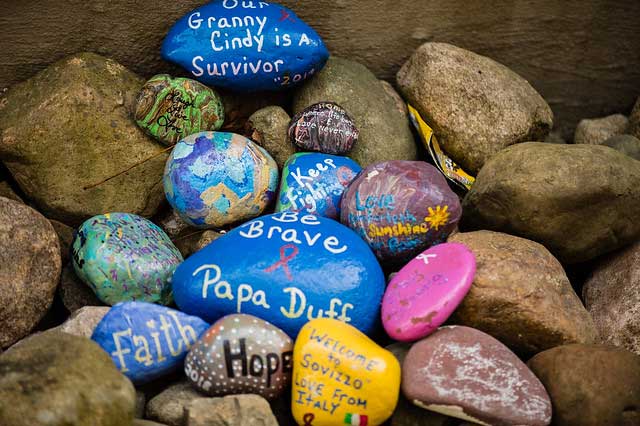 Joannie Barker, 80, remembers feeling terrified to learn she needed both radiation therapy and chemotherapy to treat her lung cancer. She clung to her daughter-in-law, Liz, the day of her first radiation appointment. Then she saw the rock garden.

"The path of rocks walking in was one of the most overwhelming things I had seen in my life. It was full of messages from other patients. It made me remember I am not alone in what I’m going through," Barker says.

Thanks to a generous donation to the Department of Radiation Oncology from former patients, a colorful rock garden lines the pathway to inspire patients before they even walk in the door. Kristan Freitag, a child and family life specialist, explains that the first donation was a large rock with a plaque that reads HOPE.

Once the message was placed in the rock garden, patients took it upon themselves to paint and add their own messages of hope.

"A lot of patients say it’s motivating and they feel a sense of community from seeing so many rocks from people who have walked the same path," Freitag says. "It gives the patients and families a support system to express themselves. A lot of family members paint rocks for their loves ones."

For radiation oncology patients, Freitag partners with Kathy Richards-Peal, an art therapist who works with pediatric patients at C.S. Mott Children’s Hospital. Any patient -- child or adult -- can paint a rock. Simply ask anyone on the care team. 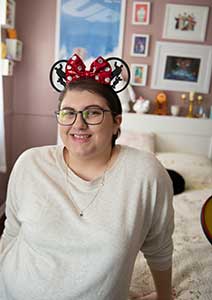 For other patients at the Rogel Cancer Center, art therapy is available with Art Therapists Sandra Drabant and Melinda Hallenback-Kosteky, who offer workshops, special projects, gallery opportunities and individual sessions during or outside of treatment.

“Being engaged in a creative process can provide a safe and gratifying way to explore difficult experiences and emotions. It can also be a way to express intention, gratitude, love and hope,” Hallenback-Kostecky says.

Hannah Thomas, 18, started radiation therapy with a reluctant attitude. She’d had surgery over the summer to remove most of the malignant tumor, medulloblastoma, in the floor of the fourth ventricle of her brain. Now, she and her parents had to travel from their home in Grosse Ile to Ann Arbor for 30 days for radiation therapy appointments that only took 10 minutes. Worse, school had started and she was missing her junior year.

She noticed the rock garden and saw other patients painting rocks, but had little interest in doing one. Painting a rock meant spending more time there when she really just wanted to go home.

"It seems like it's never going to end when you first start treatment,” Thomas says. "But it goes by so fast if you think positive. Kristan and all the people in radiation were really nice. They made it go by quickly."

Thomas changed her mind about painting a rock as she bonded with her caregivers. When she went to the garden to select her rock, she picked one so large Freitag had to carry it inside for her.

The message on Thomas’ rock is inspired by her family’s love of Disney World, where they travel at least once a year. She painted a Walt Disney quote: “If you dream it, you can do it.”

"I hope my message makes anyone who has to walk in there who is feeling down or sad, or doesn’t think this whole thing is going to end, that there’s hope," Thomas says. "If you think positive, it will go by so much faster and it will be so much better."

Learn more about art therapy and ways you can inspire others