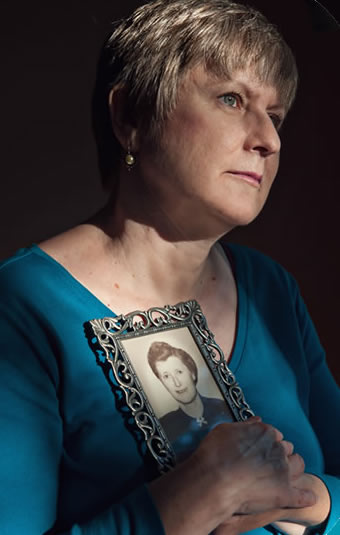 Basic steps of genetic testing
Meet with a genetics counselor and physician to:

*In some cases, a physical exam also takes place.

How one patient tracked her family's history of cancer

Lisa Sylvest, a gastrointestinal nurse and mother of two, knew cancer ran in her family.

Her father had been treated for colon cancer in 1992, but before that, many relatives on her father's side faced the disease in their 50s: her grandmother from Denmark, an uncle and an aunt.

Sylvest herself was diagnosed with endometrial cancer at age 40, in 1998, adding to her suspicion that the prevalence of cancer in her family seemed connected in some way.

"I always knew this wasn't a coincidence," she says. "Maybe it started as a gut feeling, but as I became a GI nurse, I learned more."

She suspected Lynch Syndrome, a hereditary genetic condition that greatly increases the chances of colon and other cancers, including endometrial, earlier in life than what is considered typical.

In 2005, Sylvest traveled to Denmark to honor the one-year anniversary of her father's passing. While there, she learned crucial information from a cousin: an uncle she thought had died of brain cancer actually had colon cancer that metastasized to the brain.

"I knew at that moment we had Lynch Syndrome," Sylvest said. "It was the missing of the puzzle."

Sylvest went for genetic testing at the University of Michigan Cancer Genetics Clinic. She worked with a genetics counselor to understand the process and how to proceed when she tested positive for Lynch Syndrome.

"We suspect 5-10 percent of cancer diagnoses may be caused by inherited risk," says Jessica Everett, a certified genetics counselor at the clinic. "Many patients opt to have genetic testing to gain information for their families. Identifying a genetic explanation for cancer can allow us to offer them strategies for risk reduction and early detection."

After Sylvest's diagnosis, her sister also tested positive for Lynch Syndrome. Upon having an endometrial biopsy, Sylvest's sister was diagnosed with endometrial cancer in 2010. She underwent a radical hysterectomy and has been cancer-free for nearly five years.

"My sister says my genetic testing saved her life," Sylvest says. "I've also realized that some families don’t like to talk about cancer. Like mental illness, I would argue that many conditions are a stigma."

Sylvest believes that when someone in a family has cancer, it is everyone's business. For that reason, she traveled to Denmark again in 2010 to inform her five male cousins about her genetic condition. Some have opted to be tested for Lynch Syndrome and others have not.

Sylvest is going on 16 years as a cancer survivor. Each year she gets a pap test, an upper endoscopy and colonoscopy; no new cancer has appeared. She is thankful her adult son and daughter both tested negative for Lynch Syndrome.

Up and Down the Family Tree