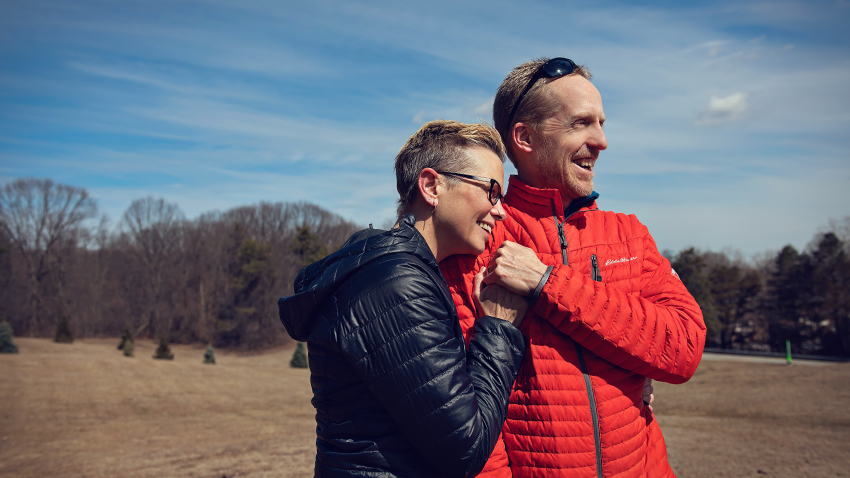 Chris Zimmer ran a half-marathon a few days before his first colonoscopy in 2016, a 50th birthday ritual Zimmer dutifully scheduled.

“I was in good health and ran one of my best times in the half-marathon, so I felt great,” says Zimmer, now 54, a competitive triathlete and father of three from Northville, Michigan.

Newly awakened from the anesthesia, he and wife Kathy were stunned when they heard the doctor say she found “a large tumor” in his rectum.

The tumor was stage 4 rectal cancer.

“It was an obvious shock,” Zimmer says.

The warning signs of colorectal cancer

Zimmer had a warning sign. About three years before his diagnosis, he started seeing blood in his stool. His primary care doctor performed an in-office examination and told Zimmer the blood was due to hemorrhoids. At this point he did not have a colonoscopy, but hemorrhoids seemed plausible.

Zimmer reported no other warning signs of colorectal cancer, and he did not have a family history. In hindsight, Zimmer realized he had experienced narrowing stool. It’s another warning sign, along with anemia, fatigue, weakness, constipation or diarrhea, changes in bowel movements, abdominal pain, decreased appetite and unintentional weight loss.

Zimmer received a complete colonoscopy when he turned 50. Although that’s the typical age to begin a routine colonoscopy, anyone with worrisome symptoms should be checked out immediately.

“The doctor said my tumor likely had been growing there about three or four years,” which is around the time he first noticed the blood in his stool, Zimmer says.

After two weeks filled with various tests, when scans revealed the cancer may have spread through the wall of the rectum to nearby lymph nodes and his liver, Zimmer sought a second opinion from the University of Michigan Rogel Cancer Center.

“Both hospitals had similar protocol to treat the cancer, but the team approach at U-M’s Multidisciplinary Colorectal Cancer Clinic made us feel we would be best served there,” Zimmer says.

The medical team discussed his treatment plan, and worked out the order he would receive chemotherapy, radiation and surgery.

“Every person, every cancer is different in how we approach it, so we get together to discuss what occurs first,” Krauss says.

Zimmer found a kindred spirit in Krauss, who also competes at mountain biking races and triathlons around the state.

“We had this common bond,” Zimmer says. “It was nice to be seen as a person and share my interests and not be just a patient.”

It also became a source of comic relief, Krauss adds, giving them both motivation. “We were in the same triathlon and I remember thinking, ‘Wow, Zimmer beat my time even though I am treating him for cancer, so it’s something he could tease me about.’”

Zimmer’s athletic nature and attention to nutrition provided the stamina that helped him power through eight rounds of chemotherapy and 30 rounds of radiation, never missing a day of work as treasury manager for Plastipak Packaging Inc. in Plymouth, Michigan.

He did miss some work after each of his three operations, the first to remove two-thirds of his liver, followed later by a bowel resection and a final one to remove a temporary ostomy. (The ostomy had been added during the resection as a temporary way to collect waste, which allowed the bowel to heal for six months.)

“I always kept active, even if it was walking a mile in the hospital soon after I had a surgery,” he says.

Not even the ostomy slowed him down. He completed a triathlon with it, including the open-water swim. “My wife and I did a lot of research online (on other ostomy patients and supplies) and I found wearing a tight-fitting surf shirt made swimming manageable,” Zimmer says.

He did have one curveball on his cancer journey that shook his positive outlook.

After round eight of chemotherapy, his stomach revolted. He found himself on the bathroom floor curled in a ball because of belly pain, then sought help at U-M’s emergency department. The pain lasted for several days and was attributed to a microperforation near his ostomy site, Krauss says.

Zimmer met with Krauss and they decided that would be Zimmer’s last chemotherapy treatment, even though the original plan called for four more infusions.

“He’s a runner and he wants to make it to the finish line, so I understand why he felt that stopping at eight treatments rather than 12 was a setback,” Krauss says.

Zimmer has always been goal-driven.

His diagnosis five years ago reminded him to squeeze in even more living than he does as a triathlete.

“My wife wanted to climb Mount Whitney in California, the tallest summit in the lower United States, and she dragged me along Labor Day 2017,” he says.

And he loved it. They’ve since climbed two more peaks in Colorado -- celebrations of being cancer-free five years after diagnosis.

Krauss considers Zimmer a “poster child” for beating colorectal cancer -- only 14 percent of stage 4 colorectal patients achieve the five-year survivor rate. The news for Zimmer remains good -- his recent scans and colonoscopy found no remains of the cancer.

Krauss also gave a nod to Zimmer’s positive outlook and continuing his passion for fitness.

“I love being outdoors no matter what I’m doing,” Zimmer says. “It makes me feel alive.”