When Edward Rosario came to the University of Michigan Rogel Cancer Center, his nausea was overwhelming. 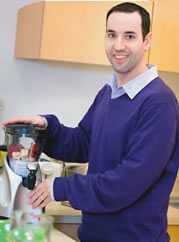 Rosario had been diagnosed with non-Hodgkin's lymphoma and, between the chemotherapy and the disease itself, his nausea became almost too much to bear. "I had to walk around the hospital with a towel on my head, because I felt so terrible," he recalls.

For many cancer patients, nausea is an unwelcome side effect of dealing with the disease and treatment. Although it can be difficult to find relief, there are several ways to combat an unsettled stomach.

"My nausea was a 10 when I first visited them," Rosario says. "But now, with the medicine and the other assistance they've offered, it's a one or a two."

Emily Mackler, Pharm.D., a pharmacist in the clinic, says there are different medications to treat nausea. A queasy stomach may be caused by neurotransmitters within the brain, and medications can be prescribed to target these. Other medications target receptors lining the gastrointestinal tract that can contribute to nausea. In some cases, more than one medication may be used to provide the best control.

"We also look at the medicines a person is already taking to see if those are contributing to the nausea," Mackler says. "If so, we'll look at modifying the patient's medical regimen by changing how they take their medicine or perhaps by switching to a different drug so they can feel some relief."

While medicine helped Rosario, he said refocusing on his diet helped treat his nausea as well. He found he was able to tolerate smoothies with protein powder for extra calories. Homemade applesauce or chicken noodle soup were also easier on his stomach.

Danielle Karsies, M.S., R.D., a Registered Dietitian in the Symptom Management and Supportive Care Clinic, says even though nausea can zap a patient's appetite, it's important to maintain a consistent diet. Eating smaller, more easily digested meals can help relieve some discomfort, she says.

"Skipping meals is not good, and it can actually make you feel worse," she says. "Making sure you drink enough water and avoiding greasy, fried and spicy foods also limits nausea." Ginger, chamomile and mint teas have also been shown to help.

In addition to medications and adjustments in food intake, complementary therapies can help patients deal with nausea, says Donna Murphy, co-director of the PsychOncology Program at the Rogel Cancer Center.

Programs such as art and music therapy, relaxation technique training and acupuncture can help patients deal with nausea. "It's mind displacement," Murphy says. "These therapies all refocus the mind on something other than the nausea, which can really help the patient."

Although Rosario says he still deals with nausea discomfort, he's much better than when he first visited U-M.

"Before getting medicine, I couldn't go a day without feeling bad," he says. "It took a while to get under control, but once it did, it really made a difference."

Learn more about nutrition and cancer treatment by browsing our nutrition articles.