Guided imagery helps one patient find her footing during treatment

The Power of Words 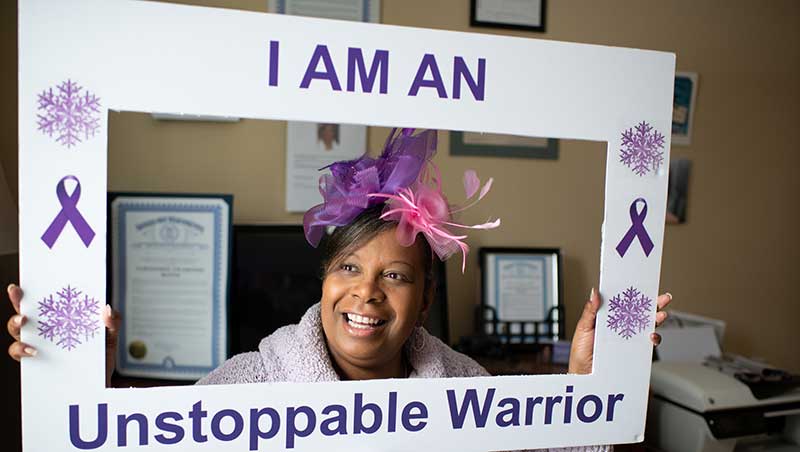 After 26 years with a rare inflammatory disease called sarcoidosis, Sheron Williams had learned to cope with a chronic illness that impacts her liver, skin, lungs and uvula and requires portable oxygen. Adding a breast cancer diagnosis to her already complex health situation left her stunned.

"Am I really going down another journey with another diagnosis? How do I handle this?" she asked herself.

Williams’ cancer diagnosis came after a routine mammogram, an annual screening she never misses. A biopsy confirmed a tumor the size of a Cheerio, triple-negative breast cancer.

Her surgeon at the University of Michigan Rogel Cancer Center, Jacqueline Jeruss, M.D., Ph.D., removed the tumor. Her oncologist, Aki Morikawa, M.D., Ph.D., recommended chemotherapy and radiation therapy to ensure her best chance of the cancer not returning.

When a social worker called her at home to explain some of the free complementary therapies offered at the Rogel Cancer Center, Williams was interested in one called guided imagery. She asked to learn more. 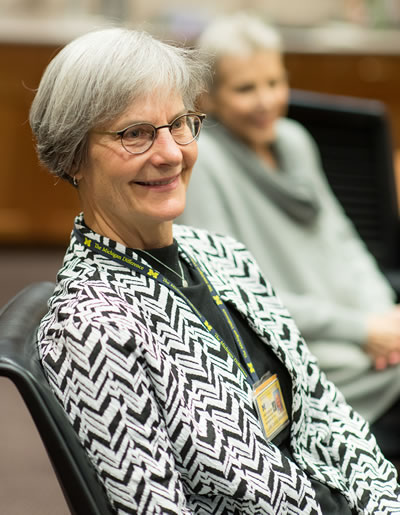 "Guided imagery is about harnessing the power of the imagination and using it to feel more calm and in control," says Claire Casselman, LMSW, a clinical social worker in the Complementary Therapies Program.

Casselman met with Williams the day before her first chemotherapy appointment to teach her mind and body techniques for learning to manage anxiety related to her cancer treatment. She gave her two guided imagery CDs to take home.

Williams hadn’t expected to need guided imagery so soon, but an allergic reaction to her chemotherapy drugs made it difficult to breathe.

"It felt like someone was physically squeezing my body, but all of a sudden I stopped and remembered what Claire said yesterday. Breathe. Cancer doesn’t have me. Listen to what the doctors are telling me," Williams says.

Casselman remembers the allergic reaction and how Williams helped herself through it using guided imagery techniques.

"She focused on her breath and ‘finding her feet.’ That’s a mindfulness technique to literally feel more grounded by paying attention to where you are and what’s available to you. Then Sharon could feel her strength," Casselman says.

Williams ended up changing to a new chemotherapy drug and is preparing to begin radiation therapy. She still listens to her guided imagery CDs around five times a week.

"It really does work. You know it’s positive when you can actually feel the positive energy replacing the fear or anger. I used to put up a wall to protect me. Now I don’t need it," Williams says.

Williams feels well enough to continue her life’s passion as a rare disease legislative advocate. She started an education-based support group called the Michigan Unstoppable Warriors Sarcoidosis Group. She is also a patient ambassador for the Foundation for Sarcoidosis Research and meets with legislators to educate them about the disease. Her goal is to have a law in Michigan for a sarcoidosis awareness month.