Quality of Care and Life

"They couldn't make promises it will make a positive change. I was willing to make a personal sacrifice with the understanding you might help others if not yourself."

Mike and Elizabeth Sanders reminisce about his time on the U-M campus as a student.
photo credit: Edda Pacifico

A clinical trial gave one patient the best of both

Mike Sanders wanted you to know: participating in a clinical trial does not rule your life. Nor does it mean your doctors only care about whether the medication is working or not.

Sanders is not what most people envision when they think of a stage 4 cancer patient. Just 32 at the time of his sarcoma diagnosis in 2014, he and his wife Elizabeth were preparing to move from their hometown of Grand Rapids for a new job.

Sanders bumped his leg against equipment at the gym but the injury was disproportionately painful. As a childhood cancer survivor, he knew about his increased risk of developing adult cancer in the long bones of his body. After injuring the leg a second time, he went straight from a biopsy to the Grand Rapids hospital for surgery.

Sarcoma is a rare form of cancer of the tissue that connects and supports the body, such as muscles, nerves and tendons. It often starts in an arm or leg, but can form in the torso, head, neck or anywhere in the body. Sanders' cancer had metastasized to his lungs.

The Sanders' cancelled their move in order to stay close to family and his doctors. He also traveled to the University of Michigan Rogel Cancer Center, where he met Rashmi Chugh, M.D., at the Comprehensive Sarcoma Clinic.

Joining a clinical trial was not a guarantee of positive results, but Sanders decided to try after qualifying for an immunotherapy study. Immunotherapy is a growing area of cancer research and treatment that works the opposite of chemotherapy. Instead of attacking cancer cells, it boosts the body’s ability to fight cancer.

"There are many forms of immunotherapy under study. Because of promising results in melanoma and lung cancer, as well as generally tolerable side effects, there is a lot of hope and excitement surrounding immunotherapy in all types of cancer," Chugh says.

"The most difficult part during my initial treatment was the negative side effects. I was exhausted and had neuropathy. I became more depleted from advancement of the disease. We wanted to preserve some sort of quality of life balance during the time I have," Sanders said. 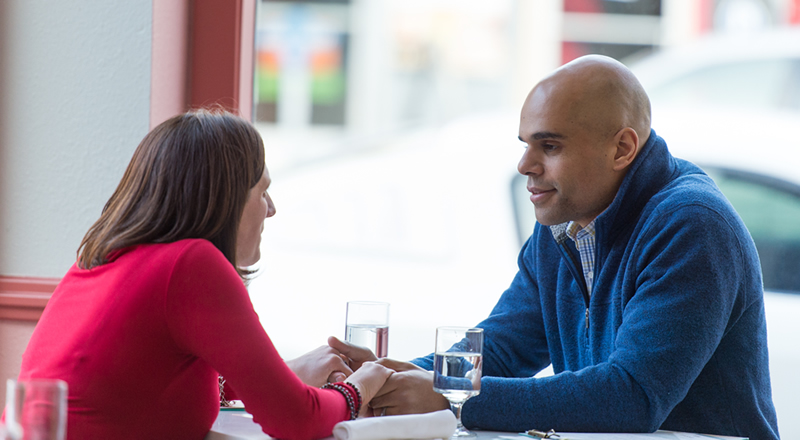 He noticed a remarkable difference in how he felt within the first three weeks of the trial. Aside from pain at his tumor locations, he did not have the same side effects with immunotherapy.

"I had renewed hope because of the physical improvements and mental boost. The side effects of my current treatment are very minimal compared with before," Sanders said.

After several months on the trial, Sanders' cancer responded positively to the drugs. His scans showed significant reduction in the size of some of his tumors. Others appeared to have stopped growing and died.

Sanders' disease remained controlled by the immunotherapy for around six months with only some of the areas are slightly enlarging. Sanders was pleased with the positive results and with the improvement in how he felt overall.

"My trial has shown you can have really positive results for yourself and a possible legacy for other people," Sanders said. "It is not an exhaustive process and doesn't take up all my time. You're not abandoned just to see the effects of the medication. My care team wants to see me successful, happy and healthy."

Mike Sanders passed away on July 26, 2016, having left his positive impact on cancer research and the future of immunotherapy treatment.

If you're interested in making an appointment with the Sarcoma Clinic, please call 800-865-1125.