A cancer researcher reflects on his personal experience with cancer and its impact on his work.

When Bradley J. Zebrack, Ph.D., M.S.W., M.P.H., was 25, he thought he might become a schoolteacher. Then he was diagnosed with Hodgkin lymphoma, a cancer that originates in the immune system. In an effort to cope, Zebrack went to a meeting of what would eventually become the well-known support network Cancer Support Community. He remembers being fascinated by the social worker who facilitated the group.

“I had this lightbulb moment,” Zebrack says. “I could see myself doing that kind of work.” 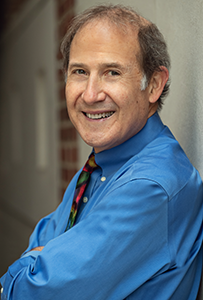 Decades later, Zebrack, a professor of social work at U-M, has served as not only a teacher and a social worker but also a researcher who studies the effects of cancer on the growth and development of adolescents and young adults. In a recent editorial, he outlined how his experience as a cancer patient has led to and influenced his work.

“I’ve always been very clear that I’m doing this work because I just want to help people with cancer,” Zebrack says, “because I know that cancer sucks.”

We spoke with Zebrack to hear more about the lessons he learned from his own cancer and how he’s used them to redefine the health care experience for patients.

Q: What was a moment during your experience with cancer that affected how you think about your work now?

I go back to when I first started hearing the term “positive attitude.”

The story I sometimes tell is I would go for chemotherapy, then afterwards get into bed and pull the covers over my head and endure a couple of days’ worth of nausea. (This was 1986, before Zofran.) After those initial waves would pass, I’d be able to lean over and turn on the radio. Eventually, I felt a little bit better, and I could walk down to the kitchen and get myself something to eat. Instead of worrying about what I wasn’t able to do, I had to flip that and think about what I was able to do in that very moment. I had to reframe those experiences.

I think that translated into my work later to think about strength and resilience. How did I find that in myself? How do we elicit that in our work with cancer patients and their fam¬ilies to try to figure out, while you’re going through this very traumatic experience, what resources do you have available to cope? How have you dealt with challenges in the past? If you’ve been successful in the past, how can you translate that into now successfully managing and adapting to cancer, so you can move forward in your life?

Q: Is there anything you remember a provider or family member saying to you during your cancer experience that was intended to be hopeful and helpful but wasn’t?

I had an aunt who I loved very much. She was a big part of my life, before, during and after cancer. Sometimes, she would come over and try to hustle me into a corner and say, “So, how are you really feeling?” as if she was trying to get the real story. It felt like more pressure to me, especially because I wasn’t hiding anything.

Where that experience played out in my work is an understanding of the emotional impact of cancer for young people. At 25 years old, you’re barely a few years into learning how to deal with the adults in your life as adults. You don’t have much experience managing your own emotions let alone having to carry the emotions of others. It’s difficult to figure out how to respond and to carry that burden when it gets unloaded on you, especially from people you love.

Q: In your editorial, you discuss the impact of meeting a man who’d had cancer at a young age, like you, and was doing well years later. Why is having a role model important for young people with cancer?

Particularly for a younger population, they’ve been having hopes and dreams and thoughts about what they want their future to be. To have cancer disrupts that; you’re then left as a young person with no vision of what your life might look like with cancer or after cancer.

But even people in their older years still have hopes and dreams for the future. They want to be around for their granddaughter’s wedding or to take that long-awaited vacation. Without a vision of a future reality, our brains fill in the gaps with information that tends to be negative, even catastrophizing. And that’s scary. So it’s important to seek out people who can serve as an example of who you could be after your cancer treatment.

Learn more about adolescents and young adults with cancer