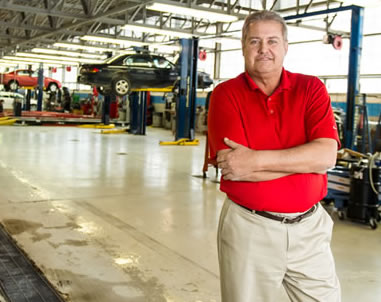 Stan Urban, 63, loves anything with an engine so it's not surprising he’s spent his career teaching automotive technology. He focuses on electrical systems, transmissions and engines. Along the way, though, he worked on brakes. Not a lot, but enough.

Two years ago, Urban received the diagnosis of mesothelioma, a rare cancer that affects the tissue surrounding the lungs. The primary risk factor for the disease is exposure to a mineral called asbestos.

Asbestos contains strong fibers and withstands high heat, making the mineral ideal for use in products like insulation, roof shingles, flooring and brakes. It creates dust during the manufacturing process that settles in the lining of the lungs. While some people work around asbestos for years without a problem, for others, even one exposure can cause mesothelioma.

The disease often remains dormant for as many as 30 or more years before causing symptoms.

"Asbestos fibers lead to chronic inflammation in the tissue in which they get lodged," says Gregory Kalemkerian, M.D., director of the U-M Multidisciplinary Lung Cancer Clinic. "Excessive multiplying of the normal cells occurs over years, resulting in DNA damage that leads to cancer."

Urban doesn’t know when he was exposed to the toxic dust, banned from products since the 1980s. However, employers were not as stringent about wearing protective gear as they are now.

"I did not find out about the issue with asbestos until after I graduated from college," Urban says. "After learning of the dangers, I started wearing a mask when available."

Mesothelioma has no cure, as it is usually diagnosed at an advanced stage after it has spread to lymph nodes or other areas of the body. Treatment includes surgery (in early-stage disease only), chemotherapy and radiation. 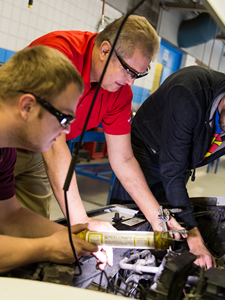 "I had virtually no symptoms," Urban says. "The day after Christmas, I pulled a can of frozen OJ from the freezer. When I stood up I couldn't get any wind. Later, my son asked why I was breathing so heavy while watching TV."

Urban's wife gave him an aspirin just in case it was a cardiac issue and took him to the doctor. He was diagnosed with bilateral pulmonary embolisms. Once the doctor learned he worked in the automotive field, they ran tests that were conclusive for mesothelioma.

Urban doesn't harbor bad feelings toward companies that continued using asbestos after it was suspected of being dangerous, but he does all he can to teach his students to protect themselves.

"We don't know what chemicals will cause a health issue later," he says. "I didn't wear a mask at first because I didn't know about the link to cancer. My students need to be safe."

Urban is thankful that the initial five months of chemotherapy is keeping his cancer from growing. Now, he gets a different chemo drug the first Friday every month until Kalemkerian says otherwise.

"There are some promising results in some vaccine trials and more trials are being done with molecularly targeted therapies in mesothelioma now," Kalemkerian says.

Despite some side effects like nausea and fatigue, Urban has missed just two days of teaching since his diagnosis.

Your workplace should have Material Safety Data Sheets (MSDS) for hazardous substances in your work environment. For more information, visit the Centers for Disease Control website: Workplace Safety & Health Topics.

Continue learning about the environment and cancer