Facing a challenging diagnosis of metastatic urologic cancer, one of the state’s top communications professionals leans into her job, laughter and love.

Early January was a busy time in the Michigan Attorney General’s office. The state’s top lawyers were still dealing with final lawsuits related to the November election. The country was reeling from the attack on the U.S. Capitol in Washington, D.C., and officials worried about what it might mean for the Michigan statehouse. And charges were announced against nine defendants in the Flint water crisis.

As communicators director for the attorney general’s office, Kelly Rossman-McKinney was right in the middle of it all.

She was also starting a second round of chemotherapy for urothelial carcinoma — a type of cancer that arises in the lining of the urinary system — after a new lesion on her spine was discovered in December. This go-around, Rossman-McKinney, one of the best-known communications professionals in Lansing, would receive radiation therapy as well.

Yet her spirit was unbowed.

“I’m holding down the fort at my @UMRogelCancer satellite office tethered to a chemo drip — and have been looking forward to the break all week!” she tweeted on January 15.

Rossman-McKinney, 66, recently spoke with the Michigan Health blog about living and working with a stage 4 cancer diagnosis, and shared her thoughts for others facing a similar diagnosis.

“It’s not like chemo hurts. It’s just me, sitting there with my IV dance partner. I had my personal cell, my work cell and my laptop going. I was watching a news show that one of my bosses was on — I was working,” she says. “Well, I was doing double duty. I was working working and I was also busy fighting cancer.”

One of the ways that Rossman-McKinney has thrived over a difficult year has been to keep her diagnosis in perspective — reminding herself it’s just one aspect of her rich and robust life.

In May 2020, Rossman-McKinney learned she not only had cancer, but that it had already spread from her kidney to her liver and spine. She started chemotherapy in June — one seven-hour session at a time — which greatly reduced the size of the tumors. Chemo was followed by pembrolizumab, an immunotherapy agent marketed under the brand name Keytruda, which helped her immune system fend off the cancer.

But the new lesion meant another round of treatment was necessary.

“I got pretty sick the first time around, but going into this second round of chemo, I’m feeling strong,” she says. “Work helps me focus. If you have something to do that can take your mind off things, embrace it. For my infusions, I always ask for a recliner instead of a bed. I work. I’m on conference calls. I’m writing.”

Without her job to keep her busy, she says she would be reduced to reading trashy novels and watching reruns of Law & Order.

“Work gives me meaning and excitement,” Rossman-McKinney says. “One of the reasons I posted that tweet is because I wanted people to see that you can have cancer and not just be curled up in ball thinking you’re going to die.”

While some doctors and patients feel it limiting to describe their cancer using military metaphors, Rossman-McKinney embraces them.

“I see myself as a warrior and my job is to fight cancer with all of the weapons and all of the artillery that Dr. David Smith, my oncologist, and Dr. Robert Dess, my radiation oncologist, can round up for me,” she says. “And I take up those munitions willingly. My attitude is, I’ve got a fight on my hands and I’m a fighter. Dr. Smith is my general — whatever he tells me to do, by golly, I’m all in.”

Rossman-McKinney credits the many people in her corner for giving her strength throughout her treatment: her entire care team at U-M, her friends — who gave her the “[expletive] cancer” bracelets she wears every day — and her family.

Her husband, “Officer Dave,” an officer with the Zeeland, Michigan police department, recently put his hands on her shoulders and said, “I don’t think you get it. You don’t have cancer, we have cancer.” He meant their whole family. 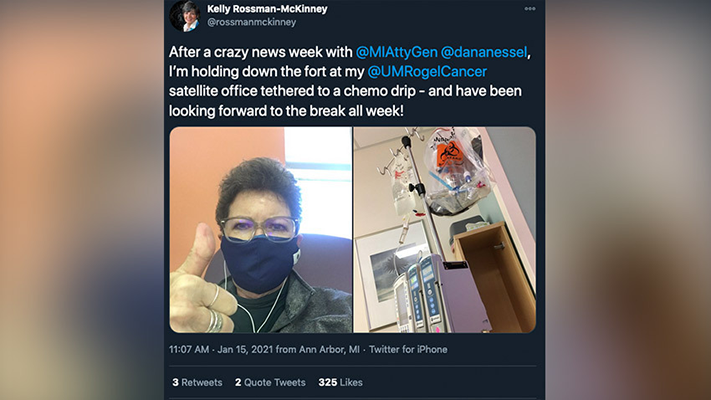 “I really don’t worry that much,” Rossman-McKinney says. “I trust that Dr. Smith and Dr. Dess have me on the right path. I don’t second guess.”

But her husband and her adult children were more worried than she had realized. That hit home when her youngest son, who lives nearby, phoned to see if she was OK after an ambulance screamed by his house.

The flip side of the coin is that their family has been spending much more time together lately, despite the challenges posed by the pandemic.

“We play a lot of games, which creates a wonderful opportunity for casual conversation,” she says. “And I’m very honest about everything I’m going through.”

One of her other pillars of strength has been laughter and the ability not to take oneself too seriously.

“It’s essential to keep your sense of humor not only intact, but on high alert,” Rossman-McKinney says.

There are so many indignities that come along with cancer treatment and its side effects, she says, describing being at the mercy of rapid changes of digestive fortune. Her family knows when they’re driving down to Ann Arbor for a medical appointment, they need to be ready to pull the car over “right that second so I can jump out of the car and drop trou,” she says with a chuckle.

Meanwhile, her treatment is continuing. And she’s not wallowing in the uncertainty of the future, but looking forward to continuing her fight from her “satellite office” at the cancer center.