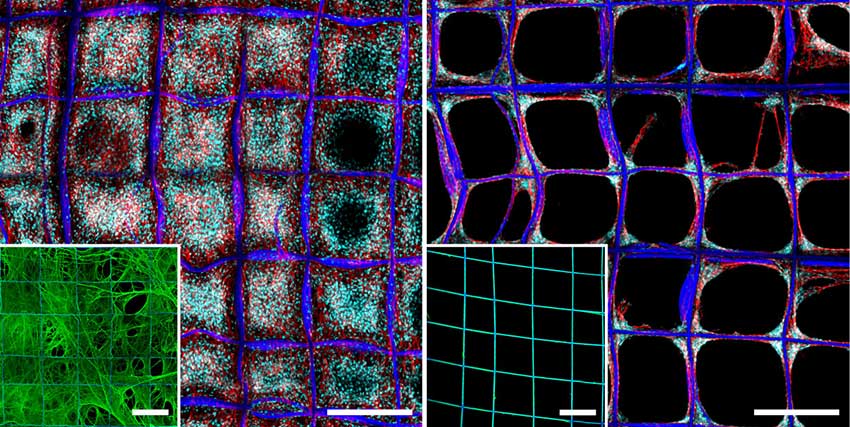 ANN ARBOR -- A new 3D structure for growing cell cultures could enable doctors to test medications on model tumors grown from a patient’s own cells, according to results from a team of engineers and cancer researchers at the University of Michigan. Unlike previous devices, the new structure is made from protein fibers that cells know how to modify.

“We can potentially use the cultures to do things like drug testing or single cell analysis, which may help us identify the best treatments for a patient’s cancer,” said Gary Luker, a professor of radiology at U-M.

At present, some patients have samples of their cancer cells grown in mice for drug testing and analysis, but the cancer cells don’t always grow and the process takes months, said Luker. An advanced petri dish, known as a 3D scaffold, could enable doctors to get answers about the effectiveness of drugs in days or weeks. But earlier scaffolds, trying to mimic the structure and composition of the gel-like network that binds a collection of cells into a tissue, also have mixed records.

“Rather than trying to guess at what the tumor cells' microenvironment ought to be, we've made a space where they can create their own cell niche, as they do in the body,” said Stacy Jordahl, a recent chemical engineering PhD graduate from U-M and first author on the paper in Advanced Materials.

The team created a network of fibronectin, a protein that attaches cells to the connective gel. Cells in tissues stretch out the fibronectin, using it a bit like the two-by-fours of a house frame. However, fibronectin tends to coil up if it’s not held open. While researchers have used layers of balled-up fibronectin to help cells to attach to previous scaffolds, the protein hasn’t been used to full advantage.

Previously, it was painstaking to stretch out fibronectin strands—pulling on them with pipettes, for example—but the new method discovered by the U-M team produces a coating of stretched-out fibronectin without the hard work. Led by Joerg Lahann, the Wolfgang Pauli Collegiate Professor of Chemical Engineering and director of the Biointerfaces Institute at U-M, the engineers built a grid of microscale cubicles, each half a millimeter to a side. Then, they repeatedly poured a solution containing fibronectin over that surface using a tube that slowly flipped end over end. The tug of the moving liquid was enough to draw the fibronectin out into networks of fibers that interlaced across the whole structure.

“With this engineered way to draw proteins into a network of fibers, we can produce a more natural environment for growing cancer cell cultures that enable us to test drugs or understand cancer biology,” said Lahann.

Lahann’s team turned the structures over to two cancer researchers, Luker and Max Wicha, the Madeline and Sidney Forbes Professor of Oncology. They used the structures to culture cells that had been removed from breast cancer patients by draining fluid pockets that can accumulate in the abdomen and chest as the disease progresses. Although cancer cells represent only about 5% of the cells in these fluids, they dominated the cell population after a few days to a week on the fibronectin network. And the cancer researchers were impressed.

“There have been a lot of technologies and approaches devised to try to grow cancer cells in culture that haven't worked so well. Most cancer cells die out when cultured in artificial conditions,” said Luker. “In this system, we could pretty consistently grow out the cultures at least for short periods of time.”

In addition, the cells seemed to change as they grew on the fibronectin network, becoming more like the kind of cells that are believed to spread cancer to other parts of the body. This could be an advantage for testing cancer drugs, as those cells are most imperative to kill. However, this bias would hinder experiments exploring cancer biology—for instance, identifying the influences that lead cells to become more aggressive or benign. In the future, the team may investigate whether changes to the way the fibronectin network is structured can remove this bias.

A paper on this study, titled, “Engineered Fibrillar Fibronectin Networks as Three-Dimensional Tissue Scaffolds,” is published in the journal Advanced Materials.

Learn more about precision medicine and this research