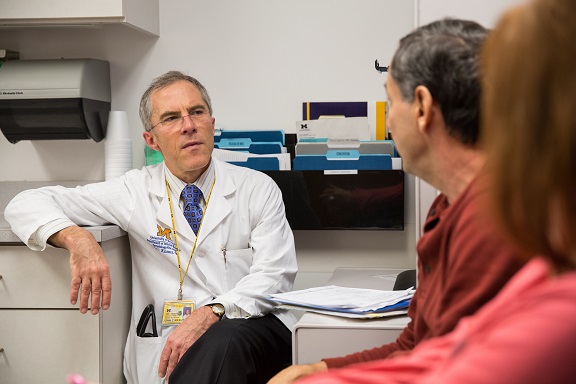 Results of the study are published in the New England Journal of Medicine.

“Sotorasib is, simply put, the best medication I have ever worked with. We saw meaningful responses in most patients with very few, mostly mild side effects,” says John C. Krauss, M.D., a medical oncologist at the University of Michigan Rogel Cancer Center. Krauss was one of the paper’s authors and the Rogel Cancer Center was one of 23 sites to participate in the phase I clinical trial, and the only site in Michigan.

The trial enrolled 129 patients with metastatic non-small cell lung cancer, colorectal cancer and several other cancers, all of whom had received multiple previous treatments and seen their cancer advance.

Patients’ tumors had a specific mutation in a gene called KRAS, the KRAS G12c mutation. This KRAS mutations occurs in 13% of non-small cell lung cancers and 3% of colorectal cancers, as well as some pancreatic cancers, endometrial cancers and melanomas. Typically, these cancers tend to be resistant to targeted therapies and patients have poor outcomes.

The KRAS gene turns on the cancer cell, telling it to grow continuously. There are more than 10 different KRAS mutations that tell the cancer cell to grow, and previous candidate medications have proven too toxic for patients. Amgen scientist screened many compounds to discover sotorasib, which was shown to shrink KRASG12c-driven tumors in animal models.

In this first in human phase I clinical trial, researchers tested multiple doses of sotorasib, and found that KRASG12c activity could be completely inhibited in patients at a dose of 960 mg, which was well-tolerated with minimal side effects. The most common side effects were diarrhea and nausea.

Among the 59 lung cancer patients given sotorasib, 32% responded with their cancer shrinking by half, and 88% saw their cancer controlled. One patient saw nearly all their cancer disappear. The median duration of response to the therapy was 10 months. Currently approved second- or third-line therapies tend to work for two to four months, and tend to have more side effects than sotorasib.

Similarly, colorectal cancer patients who had progressed on standard chemotherapy had stable disease that did not progress for a median of five months. This compares favorably with historical treatments, which last about two months.

“Sotorasib responses can happen very quickly, within three to six weeks, with some patients coming off their oxygen within a few weeks,” says Krauss, clinical associate professor of hematology/oncology at Michigan Medicine. “This dramatic and quick response is almost never seen in patients who have progressed on standard therapies. Further clinical trials are being conducted to combine sotorasib with other therapies to see if the duration of the response and the depth of the response can be improved without adding much toxicity.

“Sotorasib has promise for making a meaningful difference in the lives of these patients,” he says.

In an accompanying editorial, Judith Sebolt-Leopold, Ph.D., co-leader of the development therapeutics program at the Rogel Cancer Center, and colleague Patricia LoRusso, D.O., from Yale Cancer Center, note how scientific collaborations made this advance possible.

"Overall, the results of this trial are very encouraging, showing the first step in “drugging the undruggable.” Informed combination strategies may improve the likelihood of achieving complete responses to KRAS-G12C inhibition," they write.

Two clinical trials are ongoing at the Rogel Cancer Center. Codebreak 100, which is reported in this publication continues to accrue patients, and Codebreak 101 is testing the tolerability and efficacy of sotorasib with eight different medications. A third clinical trial, Codebreak 200, will open soon at Rogel, testing whether sotorasib is better than the standard second line chemotherapy taxotere for metastatic lung cancer that has progressed on one systemic therapy.