Exposure to chemotherapy can create hazards for nurses, pharmacists as they deliver lifesaving care to patients, but use of protective devices remains low. 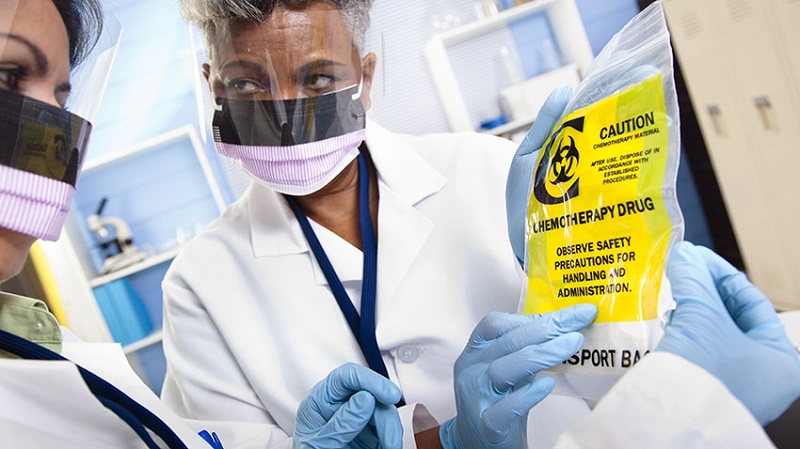 A study from the University of Michigan Rogel Cancer Center sought to improve nurses’ handling of chemotherapy by delivering an educational intervention with quarterly reminders and tailored messages. But despite the strong study design and quality intervention, it did not increase use of protective gear.

“We didn’t really move the needle at all. As a practicing nurse it’s disappointing. We were hoping we could develop a bundled intervention that cancer centers and others can use,” says lead study author Christopher R. Friese, Ph.D., R.N., Elizabeth Tone Hosmer Professor of Nursing and a professor of health management and policy at the University of Michigan.

“This is an invisible threat,” Friese says. “It’s unlike the needle stick where you know when you’ve been stuck by a needle. Early on we could understand that a needle stick conveyed serious health risks. With chemotherapy exposure, we don’t have that smoking gun. This is a subtle threat, but it’s a daily threat.”

Guidelines from professional societies recommend protective gear including double gloves, eye protection and respirators. These were built into the intervention Friese and colleagues developed.

It was a randomized trial including 396 nurses from 12 ambulatory cancer programs. In one arm, nurses received one-hour educational modules about personal protective equipment with tailored messaging addressing their reported barriers to use. They also were asked to report chemotherapy drugs spills and submit plasma samples for analysis. The control arm had only the educational modules.

After two years of the program, the researchers found little difference in the use of personal protection equipment between the two groups and no change over the course of the study. Results are published in Oncology Nursing Forum.

Researchers cite several possible reasons the intervention was not successful, including the quality of the content and technology barriers that made watching the video modules difficult. Another problem is that many of these protective devices are cumbersome. Workers report that the gear is hot, uncomfortable and difficult to apply and use safely.

Something must change, Friese says. Health care workers continue to report exposure hazardous drugs. An earlier study by Friese found nearly 17 percent of nurses who work in outpatient chemotherapy infusion centers said they had been exposed to chemotherapy on their skin or eyes.

“Health care workers face many challenges in these busy cancer centers, treating a lot of patients with complex needs using increasingly complex treatments,” Friese says. “It’s time for the field to reexamine the issue of hazardous drug exposure. Both leaders and frontline clinicians need to work together to make sure the people handling these drugs are doing so as safely as they can.”

The researchers propose three ways to start moving the needle on the issue:

Friese uses the analogy of the airplane safety rule to put on your own mask before helping others.