Chinnaiyan is being honored for the discovery of recurrent gene fusions in prostate cancer, a groundbreaking finding initially published in 2005 that has led to a better understanding of how prostate cancer develops and improved methods to detect the disease. 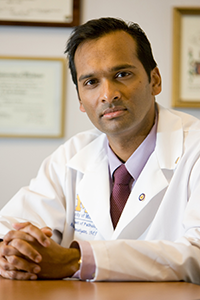 “It is a great honor to be selected for this award and to follow in the footsteps of the luminaries who have received this award in the past,” said Chinnaiyan, director of the Michigan Center for Translational Pathology and a member of the University of Michigan Health Rogel Cancer Center.

This is the sixth time the Sjöberg Prize has been awarded. It was established by businessman Bengt Sjöberg, who was diagnosed with cancer and donated two billion Swedish kronor to promote scientific research primarily focused on cancer, health and the environment. The Royal Swedish Academy selects the laureates and the Sjöberg Foundation provides the financing. Winners receive $1 million, which includes $100,000 personal prize and $900,000 to support their research.

Chinnaiyan’s lab found that a prostate-specific gene called TMPRSS2 fuses with the gene ERG, to drive prostate cancer development. This gene fusion, fueled by the hormone androgen, acts as an “on switch” to trigger prostate cancer. The fusion is an exquisitely specific biomarker of prostate cancer that can be detected in prostate needle biopsies and non-invasively in the urine of men with prostate cancer, which has led to improved methods for screening and diagnosing prostate cancer. It also represents a potential target for treatment, and research is ongoing to develop drugs against this genetic anomaly.

“The Sjöberg Prize is an incredibly well-deserved recognition for Dr. Chinnaiyan,” said Eric R. Fearon, M.D., Ph.D., director of the Rogel Cancer Center. “His gene fusion discovery provided unique insights into recurrent genetic defects fueling development of prostate cancers. The work also showed gene fusions could be at the heart of common cancer types. Moreover, he has translated his basic research findings into a screening test that has significantly improved how prostate cancer, especially aggressive prostate cancer, is detected. His discoveries are making a real difference for people with cancer.”

Former Sjöberg laureates include James P. Allison, Ph.D., who was awarded the Nobel Prize in Medicine in 2018.

An award ceremony will be held in Sweden on June 13, and Chinnaiyan will also deliver the Sjöberg Prize lecture then at the Karolinska Institute.